Escape to the Cape 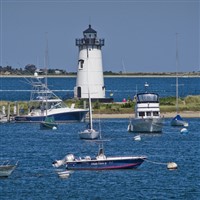 Summer in the Cape

6:00 AM Depart
Welcome to the sandy shores of Cape Cod. Extending some 70 miles into the sea, the Cape is home to both natural beauty and quaint colonial villages. You can walk pristine beaches, revel in the arts and culture, and reclaim childhood memories of seashells, sandcastles, and saltwater taffy. Your local guide will meet you at the Fairfield Inn, Cape Cod and assist with check in. Dinner is included this evening. (D)

Breakfast is included this morning at your hotel.
Your local guide will meet you at your hotel for a full day of touring. You will travel historic Route 6A, the Old King’s Highway, a scenic byway winding through centuries of Cape Cod history. It winds past hundreds of historic structures which characterize its early development. View the Eastham Windmill, a Cape Cod Lighthouse and visit the Cape Cod National Seashore Visitor Center. Sand dunes and the ocean surround you as you approach “Land’s End” – Provincetown. You are now at the extreme tip of Cape Cod. Formerly known as the “Province Lands” the Pilgrims landed here first before they decided to settle across the Bay in Plymouth. Take some time to enjoy the wonderful variety of restaurants, shops, and galleries that make this artists’, fishermen’s village so unique. Lunch is on your own today. Board an excursion vessel for an amazing experience of Whale Watching. You will travel into the natural habitat of a diverse marine environment including birds that migrate here from all over the Atlantic, and fish which use these shallow waters to feed. Try to spot Humpback, Minke, and Fin Whales going about their daily business. An onboard naturalist will introduce you to everything you see and will answer any of your questions about the whales, birds, fish and lighthouses.
Dinner is on your own this evening in Provincetown. Your guide will offer suggestions. (B)

Breakfast is included this morning at your hotel.
Your Local guide will meet you at your hotel and you will travel to the city of Boston, the capital of, and largest city in Massachusetts. It is one of the oldest cities in the United States. As the largest city in New England, Boston is regarded as the unofficial “Capital of New England” for its economic and cultural impact on the entire New England region. Boston is the city where America’s roots were formed and driving through it is like reading the pages of an American history book. Your guide will point out sights along the Freedom Trail as well as the Boston Common and Public Gardens, the Back Bay, Beacon Hill, and the gold-domed State House. Enjoy free time for lunch and shopping at historic Quincy Market and Faneuil Hall. Next, you will travel to America’s Hometown – Plymouth. Home of our Pilgrim Fathers and one of the country’s first settlements, it is well known in the United States for its historical value. A picture stop will be made at the Forefather’s Monument, the largest, solid granite monument in the United States. She stands facing the harbor, welcoming those who come by water. A picture stop will also be made at the Plymouth Rock, the traditional site of disembarkation of the Pilgrims in 1620. Traditional Thanksgiving Dinner is included this evening at Plimoth Plantation.

Breakfast is included this morning at your hotel.
Your Local guide will meet you at your hotel and will conduct a tour of Hyannis including the John F. Kennedy Memorial, the Korean War Memorial, Hyannisport and a view of St. Francis Xavier Church, the summer parish of the Kennedy Family. Admission is included today to the John F. Kennedy Hyannis Museum. The seas and shores of Hyannis Port inspired our 35th President like no other place on earth. It was here that he contemplated and accepted his run for office. Discover why he loved this place so, and how he spent his time on Cape Cod. “I always go to Hyannis Port to be revived, to know again the power of the sea and the master who rules over it and all of us,” John Fitzgerald Kennedy. You will then travel to Sandwich – the oldest town on Cape Cod. You will view the Village Green, the Great Salt Marsh, a Cranberry Bog, and Cape Cod Bay. Sandwich became the site of one of America’s largest glass factories, an industry that flourished during the 19th century. If time permits, you will make a stop at the Pairpoint Glass Store and observe the glass blowers perfecting their craft. This quaint and quiet seaside community is the hometown of Thornton Burgess, naturalist
and author of 170 children’s books. A stop will be made at the Cape Cod Canal Visitor’s Center. Explore the rich history, fascinating features, and vigilant operation of the Cape Cod Canal. The center features a retired 41 foot US Army Corps of Engineers patrol boat, a 46 seat theater, canal critters, canal wildflowers, real time radar, camera images and rocking chairs on an observation deck. Lobster dinner is included this evening. Alternate entrees will be available for any “landlubbers” not wishing to eat shellfish.

Breakfast is included this morning at your hotel.
8:00 AM Depart for home with sand in your shoes, seashells in your pocket and many fond memories of your tour to Cape Cod! 6:00 PM Approximate arrival home.