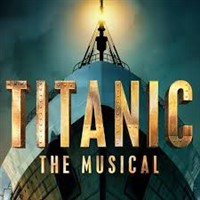 11:45AM Arrive at The Country Table for Lunch ~ Choose at seating between Turkey Dinner, Ham Loaf or Haddock with Stewed Tomatoes

1:30 PM Arrive at The Fulton Theater

2:00PM Enjoy the performance “Titanic” ~ The sinking of the Titanic in the early hours of April 15, 1912, remains the quintessential disaster of the twentieth century. A total of 1,517 souls—men, women and children lost their lives (only 711 survived). The musical play TITANIC examines the causes, the conditions and the characters involved in this ever-fascinating drama. This is the factual story of that ship of her officers, crew and passengers, to be sure but she will not serve as merely the background against which fictional narratives are recounted. The central character of our TITANIC is the Titanic herself.