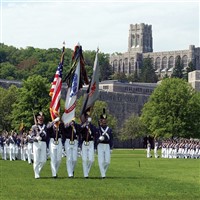 West Point, The Thayer Hotel and River Cruise in the Hudson Valley

10:30 AM Guided Tour of the US Military Academy at West Point—On this tour, our guide boards your vehicle for a combined bus and walking tour which tells the story of West Point, its role in the Revolution, its famous history, along with stories about graduates who shaped our nation.  The tour will bring the Long Gray Line to the present as you learn of the cadet experience and West Point’s continuing role in training the leaders of tomorrow.  This tour of West Point makes stops at the Cadet Chapel, the Plain which is the Cadet academic area, and Trophy Point with the million dollar view over looking the Hudson River.

Buffet lunch at The Thayer Hotel. The Thayer Hotel at West Point has been part of American history since 1926, when it was originally constructed to accommodate U.S. Military Academy personnel and their guests. It was a successor of the original West Point Hotel and is named for Colonel Sylvanius Thayer, Superintendent of the Academy from 1817 to 1833.

2hr Hudson River Cruise on the Pride of the Hudson. Cruise through the majestic Hudson Highlands aboard the luxurious Pride of the Hudson on the Hudson River! Your adventure will begin at Blu Pointe in Newburgh, NY and your captain will narrate the sights along the way! Bask in the open air on the spacious sundeck or enjoy the comfort of our climate controlled main salon featuring huge wrap-around windows. The friendly and professional crew will respond to all of your needs.

8:30-9 PM Approximate return to the area