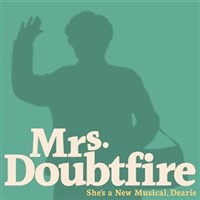 Driver Gratuity is not included.

2:00 PM Enjoy Mezzanine seats for Mrs. Doubtfire. Mrs. Doubtfire is a musical now, and she's here to make everything better! Based upon the beloved 1993 Twentieth Century Fox Motion Picture, Mrs. Doubtfire features a book by Karey Kirkpatrick and John O’Farrell, music and lyrics by Wayne Kirkpatrick and Karey Kirkpatrick, (the Tony Award®-nominated team behind Something Rotten!), direction by four-time Tony Award winner Jerry Zaks (Hello, Dolly!), choreography by Lorin Latarro (Waitress), and music supervision by Ethan Popp (Tina: The Tina Turner Musical). Daniel Hillard, a struggling, out-of-work actor, will do anything for his kids. After losing custody in a messy divorce, he disguises himself as Scottish nanny Euphegenia Doubtfire in a desperate attempt to stay in their lives. As his new persona begins to take on a life of her own, Mrs. Doubtfire teaches Daniel more than he bargained for about how to be a father. A hysterical and heartfelt story about holding onto your loved ones against all odds. Mrs. Doubtfire is the next big musical comedy for families — of all kinds.

5:00 PM Depart for home after the show

Dinner stop in route home, on own